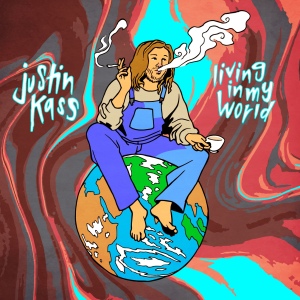 Santa Barbara multi-instrumentalist Justin Kass sports a résumé padded with albums that are key touchstones of the central coast’s hyperlocal rock scene. From Reefcity’s high-energy beach rock to The Shorelines’ intoxicating surf-jazz, his output and instrumental chops as a drummer are well versed in idioms spanning several rock genres and sounds.

On “Living in My World,” Kass tries his hand at composing an ambitious art-rock ballad. It’s an elaborate and colorful opus segmented into multiple phases of varying complexity. The intricate acoustic arrangement on the track’s front leg gives it the feel of a psychedelic hymn, only until a whirlwind of synths and guitars shatter the atmosphere and the instrumental comes entirely unhinged. Through all the madness, Kass remains, maintaining his stoned and observant demeanor as the world manically unfolds around him.

Listen to “Living In My World” below and keep up with the latest music and news from Justin Kass on Instagram.