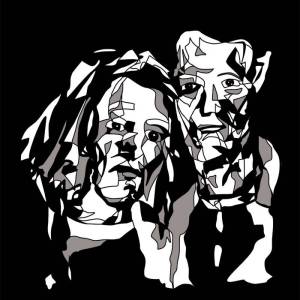 As the new decade approaches, California indie rock continues to exist in all sorts of different shapes and sizes. Out of the many coastal cities along CA’s southern and central coasts, Santa Barbara’s local scene is ripe with creative groups chipping away at developing something of a distinct sound. That narrative especially applies to The Shorelines, the psychedelic duo comprised of songwriters and multi-instrumentalists Maxton Schulte and Justin Kass.

Over their first two records, Schulte and Kass have forged a messy, intoxicating aesthetic that encompasses elements of surf, garage and jazz, among many other styles. Their latest album Head Arrangements ventures down the same wormhole, fusing their medley of mind-bending sounds with a familiar lo-fi texture.

In the time between the band’s first two albums, there was a noticeable improvement in the ease with which they navigated each tune. The song structures on their sophomore LP Sides of Us were loose and exciting, simultaneously presenting a stronger sense of direction than on their debut. Similarly, the jump to album number three beholds an enhanced attention to detail. The musical direction of Head Arrangements, though sonically familiar, feels deliberate and purposeful, each instrumental nuance adding a touch of color. From sweeping streaks of distortion to pummeling drum arrangements, the music never stops pushing forward.

The album opens with arguably its most addicting tandem of songs in “Goes to Flows” and “Love Is Here.” Both cuts spotlight the band’s ever-improving grip on executing bold instrumental compositions of varied flavors, especially on “Flows,” which rides a steady groove on its way to a blistering outro that borders on shoegaze. The stripped back surf-jazz of “Love Is Here” features Schulte sliding in and out of the mix with warbly guitar licks that add to the track’s calculated tension. It’s a masterclass of simplicity, establishing a to-the-point attitude present throughout much of the record.

For as unabashedly experimental as The Shorelines are, they are not a vocal-oriented group. Sides of Us offered a few genuine attempts at melding their ambiance-driven soundscapes with singer-songwriter sensibilities, but ultimately, the emphasis was still on the texture and mood of the music, the space it created and the instrumental progressions in each song. Rather than using the voice as a focal point, the duo emphasizes the grooves and rhythms of the music, often manipulating the vocals to work as an accompanying tool in the grander scheme of their sonic thesis.

At moments, Head Arrangements takes its own stab at crafty lyric-focused call-to-actions, most notably on “Consciousness, Pt. I” and subsequent track “Consciousness, Pt. II.” The former opts for semi-rowdy surf-rock. The track ends up a little long-winded, but provides a welcome change of pace amidst the instrumental heaviness of most of the album. “Pt. II” reduces back into smoother pacing and a lead melody that toes the line between hypnotic and overly drawn out. The pauses of silence between each bar on the first two verses inject a glowing stillness into the track, which is then accentuated by a flash of rigid, reverb-laden guitar – Schulte’s most recognizable trait as an instrumentalist.

“Facing the World” sticks out for both its gentle groove and the soft-spoken tone with which Schulte delivers his weary observations. It’s quietly pop-friendly; easy to hum and at times, musically understated. The calm doesn’t last; however, as the druggy mix on the chorus eventually fades into a bass-led passage of straight boogie rock. These funky sentiments get expressed even further on the loose and bluesy “Strong Changes.” This track, along with the other jam-heavy numbers that close out the record, highlights the tenacity of Kass’ drumming. His chop gives the music its spine and drive. It’s the bassline for the album’s cohesion and is also responsible for a chunk of its personality.

At large, Head Arrangements continues to showcase The Shorelines’ ability to interpret classic styles through a unique lens. Their extended jams are played with confidence and at times, are even captivating. Perhaps even more promise can be found in the underlying grooves of their catchiest songs, where psychedelia meets funk, jazz and dance. It’s not unrealistic to envision them venturing deeper into that world in the future.