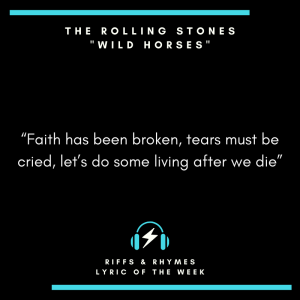 Lyric: Faith has been broken, tears must be cried / Let’s do some living after we die

Background: Originally written in 1969, “Wild Horses” was released in April 1971 on the acclaimed album Sticky Fingers and was later put out as its own single just a few months after. The initial recording session at Alabama’s Muscle Shoals Sound Studios was a productive one which also saw the tracking and production of the classic Stones cut “Brown Sugar.” Both tracks were not released until 1971 in light of disputes with the band’s record label and keyboardist Ian Stewart’s dislike of playing minor chords on the piano. Prior to the Stones’ release of the song, country music legend Gram Parsons, a good friend of the band, convinced them to let him record his own version of “Wild Horses” with The Flying Burrito Brothers, which appeared on the 1970 album Burrito Deluxe.

After the Stones’ three day stint in Alabama, “Wild Horses” emerged as a magical moment in the band’s vast catalog. Keith Richards’ 12-string guitar draws out the melancholy sentiment throughout the verses and chorus, which Mick Jagger compliments with his weary yet earnest lyrics and delivery. It begins with looking back at simpler times in a relationship and quickly progresses towards the characters in the song becoming inseparable in times of distress. No matter how grim things may look ahead, the narrator never second guesses his loyalty. The ending leaves listeners at a fork in the road. Some find hope in the idea that the lovers will eventually reunite, while others favor the more poignant path of an estranged couple who may never see each other again.

Avid gymrat, aspiring cowboy, advocate for breakfast at all times of the day View all posts by Alex Johnson