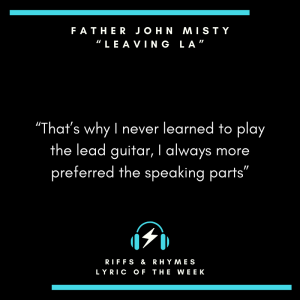 Lyric: That’s why I never learned to play the lead guitar, I always more preferred the speaking parts

Background: Eight years ago, Josh Tillman bid farewell to his music career as J Tillman and Father John Misty was born. The American singer-songwriter known for his outspoken narrative voice has released four studio albums under his current musical moniker. Off of his third record Pure Comedy (2017), the 13-minute, 10-verse epic “Leaving LA” encompasses just how powerful his narratives can be. Acoustic guitars and the occasional accompanying strings create a sort of circular progression throughout the song, detailing LA’s spiritual, ethical, and moral flaws. The track is ultimately a deep dive into the life of a songwriter who is just as complicated and has just as many demons as anybody. Oftentimes it is easy to think of our favorite musicians or celebrities as people who live in a different world and do not experience the same things we do. In reality, they are people too, and they also experience the unspoken. They experience, as Father John Misty called it, a “giant mess of ego and fear and vanity” – “Leaving LA” turns the unspoken into something tangible.

View all posts by Alex Johnson