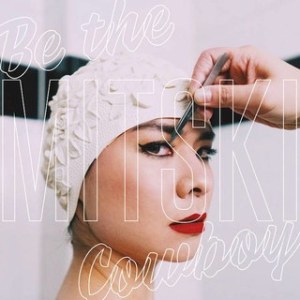 In a world of diminishing indie rock icons, Mitski is blossoming into one of the independent scene’s most beloved singer-songwriters. The 27-year old Japanese-American musician, widely known for her nomadic lifestyle and endless touring, is much more than a measly indie rocker. She has a subtle knack for giving pop songs an artsy flair, frequently references ‘90s grunge and alt-rock, and her lyrics are often described to be unbelievably vulnerable.

While her association with the indie rock movement will probably never completely disappear, Mitski’s career has never been under the spotlight more than it is now. After a widely publicized album rollout and a massive tour with Lorde and Run the Jewels, Be the Cowboy feels like an artistic breakthrough. It’s easily her boldest and most expressive release to date, from the production down to the cover art. While this album doesn’t reinvent the wheel on any creative fronts, it presents an admirable display of songwriting that teeters between open-minded and absolutely desperate, over short-lived bursts of colorful instrumentation.

Mitski’s money lies in her emotional appeal. “I know that I ended it, but why won’t you chase after me?”, she sings on the early moments of the record. Her voice sounds wounded, susceptible to emotional harm, simultaneously capturing a quirky and fun personality within the music. The memo for Be the Cowboy on Mitski’s Spotify page reads “dance if ur lonesome <3”, the perfect liner notes for an album that is cute, sad and powerful all in one.

At times, the short track lengths prevent the songs from reaching their full potential or at making least a grander statement, such as on the ambient jangle pop fusion of “Blue Light.” If the music on Be the Cowboy was fleshed out into longer and more elegant arrangements, this album could have been a giant, emotional masterpiece, especially when taking into consideration Mitski’s detailed and pensive lyrics. The songs that sound and feel bigger are often better, including the gutsy opening track “Geyser” and the MBV-esque “A Pearl.”

The upside to the brevity of this record is that it’s easy to digest from track to track, even with Mitski’s heart-heavy character portrayals. Her style of songwriting is reminiscent of Danny Brown’s approach to crafting short but effective rap songs: quick verses that are to the point and simple refrains for choruses that are minimal, yet still memorable, such as on the upbeat heartbreaker “Nobody.”

The music on Be the Cowboy is both pleasant and danceable, though nothing about it is overly unique or cutting edge. Some of the tracks that lean towards dance-pop, like the twirly synth bop “Washing Machine Heart” and the angst-filled “Why Didn’t You Stop Me?”, take few risks, productionally speaking, but are genuinely fun sad songs – a contrast that Mitski excels at on this LP. Her music’s signature trait has always been its open-hearted amenableness, but a chunk of the instrumentals on this project have a feel-good vibe standing on their own. Take “Lonesome Love” for example, a mellow and sunny folk-pop tune that sees Mitski playing an optimistic but broken girl who can’t even win her breakups. It’s this appeal that will continue to be her calling card and Be the Cowboy is accessible enough to bring it to a wider audience.

Favorite tracks: Geyser, Why Didn’t You Stop Me, A Pearl, Lonesome Love, Nobody