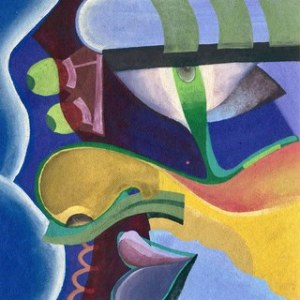 Midwest/East Coast wordsmiths milo and Elucid are at the very heart of the progressive hip-hop movement that has been beaming over the past five years. After a few track collaborations on each other’s solo works, they’ve assembled to form Nostrum Grocers, a tandem that combines milo’s off-kilter poetry with Elucid’s inventive, New York persona to form a fury of raps pertaining to philosophy, the arts, activism and existence.

Their debut LP as Nostrum Grocers has been in the works for a few years, and after an intense creative period for both artists, the self-titled project has arrived to excited fans and strong acclaim. With two rappers as recently successful and milo and Elucid, this album was an event, certainly in terms of underground hip-hop artists. Elucid has been at it for a decade, gaining recent praise for his work as a part of Armand Hammer with Billy Woods. As for milo, his last two records are maybe his finest yet (not counting his work as scallops hotel), ranking among the best in rap the years they were released.

They waste little time in their introductions and get straight to spitting bars. “circumcision is the first betrayal” welcomes in Elucid’s aggressive flow over a dark, broken drumline-like beat. He sounds menacing and full of life, also injecting bits of humor into his lyrics, saying his next tape will be a “K-pop crossover”. He uses one creative flow after another, often stealing the show from milo on the first half of the album. Their styles are similar in tone, but they have more contrasting characteristics than one would assume. Elucid raps muffled, gritty readings, while milo enunciates like a slick acrobat – but they convey largely similar messages of optimism and guts.

They trade bars relentlessly; “milk drunk” and “medium” serve as two cypher style cuts, light instrumentally and lyric-heavy. “camera” echoes Common’s 2005 conscious-gangsta jam “The Corner,” until a faded horn wallows its way in. This middle stretch of the album its its strongest run of consecutive tracks; the beats excel thanks to great sample choices and densely assembled bars.

The beats that miss on this album have a recurring trance-like vibe and are noticeably slower-paced than milo or Elucid’s recent music. It’s aesthetic appeal is interesting but only for a short while. The intro on “where’ing those flowers” recalls the sounds of Blu and Fa†e’s Open Your Optics to Optimism record, then quickly switches into buttery lounge rap, laden with old, drawn out vocal samples and a ringing piano. This is another moment where the music comes on strong and vibrant but can’t keep up the excitement. A lot of these instrumentals would probably sound great shortened as a part of a Stones Throw beat tape.

Despite these fallbacks, there are still lots of fun quotables and an abundance of head spinning lines. “This a thousand-dollar tape cause I say so, wipe my ass with your gatefold,” milo raps on “walter hudson.” As we’ve come to expect from these guys, each verse is coated with ethnic and spiritual affirmations, which isn’t as effective this time as it usually is, but for those who enjoy their raps abstract and intertwined, their is plenty to dive into.

It’s worth pointing out the clever samples and amazing details that exist in the beats on Nostrum Grocers, which become more clear with each listen. Unfortunately, the overall sound is just not as engaging as one would hope. Both of these guys are far above average rappers with distinct styles and will continue to make great albums in the future, but their debut collab captures lightning in a bottle only in spades.