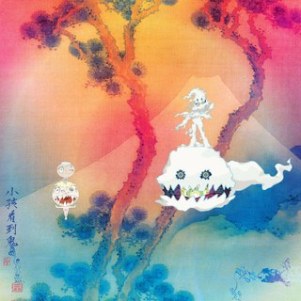 If there was one Kanye West release this summer I could expect to be completely lackluster, it was his collaboration with Kid Cudi. It’s not that I had zero hope for this project, but my personal interest in the career trajectory of both artists has long been going in the opposite direction. To my surprise, they delivered. The long awaited collaborative project from the G.O.O.D. Music tandem, titled KIDS SEE GHOSTS, is a journey through abrasive hip-hop and neo-psychedelia, bridging together the unhinged psyche of West and the drugged out diffusions of Cudi to form a wild projection of mental health.

Stylistically, this collaboration pushes hip-hop into bold territory. KIDS SEE GHOSTS arrives in dirty fusions of psychedelic and electronic music, utilizing noise and chaotic production to amplify the neurotic thoughts of Cudi and Kanye. The record gains momentum with the explosive opener “Feel The Love,” a rapidly-building, industrial-inspired anthem. Kid Cudi’s howling on this track, as well as on the spacey and motivational “Reborn,” show shades of 2009 – 2011 Cudder.

For the most part, the vocal performances on KIDS SEE GHOSTS are enjoyable, but the most exciting part of the record is experiencing Kanye and company reaching into the bizarre and inebriated layers of their production pallet. “Fire” sounds like the ritual music you play when preparing to make a sacrifice to the grunge gods. They also manage to flip a 1930s jazz sample to fit the tribal drum loops on “4th Dimension.”

This project certainly benefits from its short run time, as even the mediocre tracks are initially interesting. “Kids See Ghosts” fits the mold of the record but fails to add anything to the tracklisting except a feature (Yasiin Bey) and “Cudi Montage” lacks the flair of the album’s front half and the moodiness of “Reborn,” but sports notable guitar work. If this were a longer record, rest assured there would have been some failed experiments.

Hindsight is 20-20, but going into this album, many would have said the only way for these two artists to make a formidable record would be for them to push boundaries and test their experimental sides. Anything less would have likely made for a forgettable album. KIDS SEE GHOSTS is edgy enough where it won’t be universally loved, but it’s worth appreciating how off-the-wall Kanye, Cudi and the production team went for this record. That quality always holds up over time.