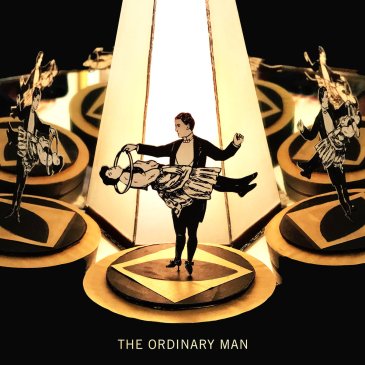 After numerous rapper-producer collaborative albums, North Carolina born beat maker L’Orange is back with his latest solo effort The Ordinary Man. Released on one of hip-hop’s favorite record labels, Mello Music Group, his new project is another sample heavy tribute to old film and radio, a smooth orchestration of beats and bars, and perhaps his most accomplished individual record to date.

For this new record, L’Orange recruits an army of prominent underground rap names, including Blu, Del the Funky Homosapien, Elzhi, Chuwee, label mate Oddissee and more. His solo work has a much more singular tone than some of his collaborative projects, but that’s not to say The Ordinary Man isn’t diverse. The soundscape has plenty of twists and turns, all of which are brought together by L’Orange’s archaic touch.

My favorite thing about this album is that the spotlight is truly on L’Orange’s production. 11 out of the 16 tracks are scarce of raps and it really allows you to soak in the instrumentals and their old-fashioned aesthetic. When guests are called upon, they pull their weight, resulting in a smooth and cohesive feel that supports the overall film L’Orange has created.

In the album’s best moments, the beatsmith turns his affinity for nostalgia into theme music of his own. Blu and Elzhi tag team a buttery beat on “The Difference” – a track old heads can salivate over. The mesmerizing keys on “Parlor Magic” are replaced by a dreary horn section on the chorus, making for one of the most cinematic cuts on the entire record.

“Stage Magic” is another triumphant showing, only to be topped by the uplifting brigade of “Cooler Than Before”. Other tracks on the back half of the record are passable, but many still possess likable qualities, like the dusty drums on “Plastic Fame” or the rickety piano riffs on “Anywhere Is Just Everywhere I Haven’t Been Yet”.

So what makes this album good? It’s simple – L’Orange is a good producer. I like his beats. Overall the album is a little top heavy, with a lot of my favorite tracks being towards its front half, but in total it’s only 36 minutes long. The last thing it does is drag on.

One thought on “L’Orange – The Ordinary Man”