Last month while spending a weekend in Santa Barbara, I had the pleasure of meeting local psychedelic rock band, The Shorelines. Formed by multi-instrumentalists Maxton Schulte and Justin Kass, the band recently released their debut album Somewhere In Time.

I caught their gig at Pure Order Brewing Co. while enjoying some good beers and the not so epic Mayweather – McGregor fight. After two sets of playing everything from classic cuts by Pink Floyd and Jimi Hendrix, to some songs from their new album, I came away fascinated with their material and how they played it. In the time since the show, Somewhere In Time has been a mainstay in my rotation. It’s one of the most pleasant surprises of 2017 and safe to say, I’m stoked I found it.

The Shorelines’ debut record is a 36-minute journey through the sights and sounds of psychedelia. With influences ranging from free-form jazz to space rock, Somewhere In Time is a loose, adventurous blend of styles that suits a camping trip in the mountains and a morning surf sesh all the same. The band approaches their musical agenda with a great sense of liberation, and their ability to fuse together so many styles shows remarkable potential.

These guys own their sound, but just because they feel comfortable on their home turf doesn’t mean they are afraid to experiment. Often times they free themselves from all boundaries, a trait well represented by the loose and lengthy song structures of cuts like “Beach Jam” and the title track “Somewhere In Time.”

Some of the shorter songs on the record also capture the duo’s hidden likeness for upbeat, dance vibes. “Hurricane” is a noisy jam dripping in replay value, while “Tangerine” shows a more melodic side, full of hypnotic guitar riffs and a pounding drum sequence that result in rhythmic bliss.

Through all the analysis, one thing stands out: these guys love music and they love to jam. I had a bunch of questions for Maxton and Justin about their new project and life as young musicians in Santa Barbara. They talked about their major influences, the different ways they like to collaborate, and some of their aspirations for the band in the near future. Here’s our conversation:

You guys just released your debut album Somewhere In Time last month. I think it’s a great record. Can you guys tell me about how the project came to be? Is it something you’ve been working on for a while?

Maxton: We’re beyond grateful that the album is finally out. We began tracking in November, 2016 and finished May, 2017, with an additional 2 months worth of remixing and mastering. Coincidentally the 50th anniversary of the Summer of Love.

Justin: The project came to be in a very organic way. Maxton and I have a strong musical and personal connection, and we finally decided to record after a few years of jamming together.

You guys really embrace a psychedelic sound throughout the record. Artistically speaking, what’s inspired you to take your music in this direction? Do you remember what initially drew you in to this kind of sound?

Maxton: All forms of psychedelic music, especially in context of jazz, world music and hip-hop are influential. Our blend of genres is diverse and fits under our psychedelic umbrella in more ways than one.

Justin: I fell in love with the 1960’s era of psychedelic music, because I enjoyed bands like Cream, Jimi Hendrix, The Beach Boys, The Beatles, The Doors, Pink Floyd, The Animals, etc. I love the notion of limitless boundaries. Jazz music is also incredibly psychedelic; if anything, it’s the most mind bending music out there. Both genres contain the following things: improvisation, counter melodies, modulation, polyrhythms, and most importantly, the expansion and exploration of simple ideas. For myself, both follow the footsteps of traditional African music. Maybe I’m nuts. 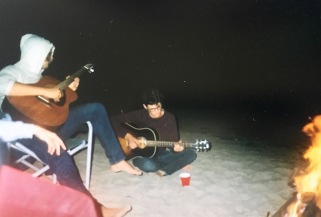 A lot of people say Santa Barbara has a pretty distinct vibe. How have your experiences in SB influenced you from a musical perspective?

Justin: Santa Barbara is pretty much paradise, but real. It is an artist’s haven, from Charlie Chaplin to Mike Love (The Beach Boys).

Maxton: It’s a beautiful trap. The creative energy in our art scene is always present here.

Maxton, you mentioned before that a lot of local musicians like you guys bounce around the area playing for different bands and stuff. Justin, you also recently put out an album with your band Cows Cabbage. It sounds like you guys spend a lot of time around your instruments. Would you say that’s pretty accurate?

Justin: I’m currently in Cows Cabbage, The Shorelines, and my City College jazz combo. I do spend most of my “free time” playing drums, guitar, singing, writing poetry, and listening to music. If I could, I would spend more time with my instrument(s).

Maxton: It’s really common for local musicians to hop from project to project, both in the studio and on stage. Supporting everyone’s side projects keeps the creative juices flowing and our local scene more valuable, in my opinion. 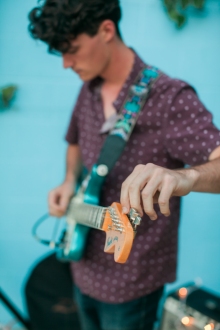 Going back to the album – “Tangerine” was one of the songs you played in your set at Pure Order. It’s a fun, catchy tune. Is the song title at all related to the band Tangerine Dream? What was it like recording that track?

Maxton: “Tangerine” was actually one of the first songs that we recorded last November. Though it illustrates more of a disco influence, you can still identify our signature approach. The meaning behind “Tangerine” is actually referencing the strain, Tangerine Dream. However, the song is essentially a metaphor about being friend zoned.

There’s a lot of stretches throughout the album that are purely instrumental, where you guys are just jammin’. When you start working on something new, do you always start with the music first? How does songwriting figure into your process when you’re crafting a song?

Maxton: Our songs are typically written instrumentally first, either by improvising at rehearsals or just brainstorming on our acoustics. We forward ideas to each other almost daily. When we’re performing we have many extended jams so we wanted to keep the integrity and impact of our live shows in the recordings.

Justin: We like to have an approach of no approach at all. Anything goes, there are basically no creative boundaries. Typically, our writing instrument of choice is the acoustic guitar. Usually we write specialized parts on the instrument we’re most comfortable with, Maxton on the guitar and me on the drums.

I really dig the transition on “Project 3”; it starts out really groovy and shifts into a slower, dreamy sequence. There’s quite a few songs where you guys switch up the tempo like that. Take me behind your creative process when it comes to writing the music and creating song arrangements. Is it really collaborative? Or do you guys give each other a lot of freedom to be creative, then kinda see what comes out in the end?

Maxton: Our music is very collaborative. Music has no limitations for us so it’s an exciting process. The element of surprise is an essential part of life so we love taking songs from one place to another. We stay true to free form, similar to the approach behind fusion and raga. Throughout the album you can also hear numerous recordings we took from public dialogue, nature samples and other everyday sounds.

You certainly bear a lot of different musical influences. “Beach Jam” has sort of a bluesy vibe to it. What was the inspiration behind that specific song?

Maxton: One afternoon, Justin and I decided to have a rehearsal along the coast of Rancho Dos Pueblos. We set up all of our equipment on a deck near the shore and spent around 3 hours improvising new material – “Beach Jam” being one of many demos that we recorded! That afternoon allowed us to simply explore the serenity with no one to crowd us.

Recently you guys have been gaining some momentum playing a lot of the local venues. What’s next as far as performing? Any plans for the near future as far as new music?

Maxton: We currently have new members and material on the horizon so we’ll be returning to the stage later this fall. We generally play shows in waves, allowing us equal time set aside for writing and recording. We have intentions to release as much music a year as we can.

Justin: We are planning on releasing two records a year. That is our new goal. Performing isn’t our top priority, although we did find a bass player to fill in for our live guy. It shouldn’t be too long until we’re back on the road.

Everybody has dreams. A lot of the time we get too busy to chase them or we simply just choose to ignore them. What keeps you guys going?

Justin: I think people are afraid to chase their dreams because of the risk of failure. I believe that to succeed in something, you have to go all the way in. Sometimes having a backup plan means that you’re not fully into your main plan. The thing that keeps me going is the fact that I feel as if I have been given a voice to be heard, and blessed with certain musical talents which make that possible.

Maxton: Everybody does have dreams. However, too many people in our generation will think the world owes them something, which is absolutely absurd. Nothing changes if nothing changes, as my pops always says. Due to school, work and outside relationships we run into normal scheduling conflicts but will always make time for each other and the band. We keep on going because at the end of the day, once music has consumed your soul, it doesn’t leave. 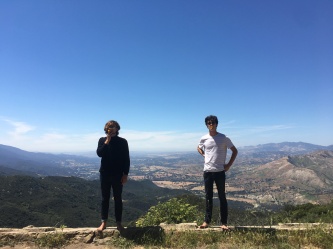 Follow The Shorelines on Instagram (@theshorelines) to keep up with their latest news and music. Stream their new album Somewhere In Time today!

4 thoughts on “Talking with The Shorelines about music, Santa Barbara & their debut album”