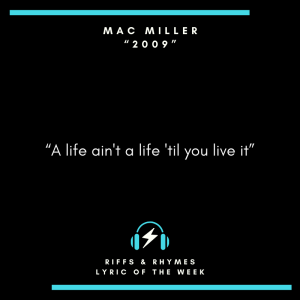 Lyric: A life ain’t a life ‘til you live it

Background: Over the past several days, there hasn’t been much music talk in the rap world other than about Mac Miller. On Friday, January 17, Miller’s estate officially released Circles, the posthumous companion project to his last full-length album prior to his death, Swimming (2018). A young but experienced artist who had undergone many shifts in style and sound, Swimming marked a progressive step forward in Miller’s career. More than ever before, heavy personal issues and battles with addiction crafted a mood that he was able to carry throughout the entire album. Over a plaintive funk and soul backdrop, Swimming frequently referenced Miller trying to keep his head above water in what seemed like a never ending fight against his own demons. On “2009,” Miller raps, “Sometimes I wish I took the simpler route/Instead of having demons as big as my house.” Throughout the album’s entirety, you can hear both his pain and his perseverance through his struggles.

After Miller’s death in September of 2018, his music reached its highest peak on US charts, with “Self Care” shooting as high as #33 on Billboard’s Top 100. His lasting legacy as an individual, however, had already been solidified throughout the music industry. Just over a month following his death, several of his fellow rappers, collaborators, musicians, and friends gathered to pay tribute. It’s impossible to deny how Miller’s music and personality impacted countless lives, and his absence still lingers in the hearts of many. To hopefully ease some of the hardship that still lies from that tragic September morning, Circles serves as a fitting curtain call to a fruitful career that ended far to soon.

View all posts by Alex Johnson